Join us here to receive a welcome discount code 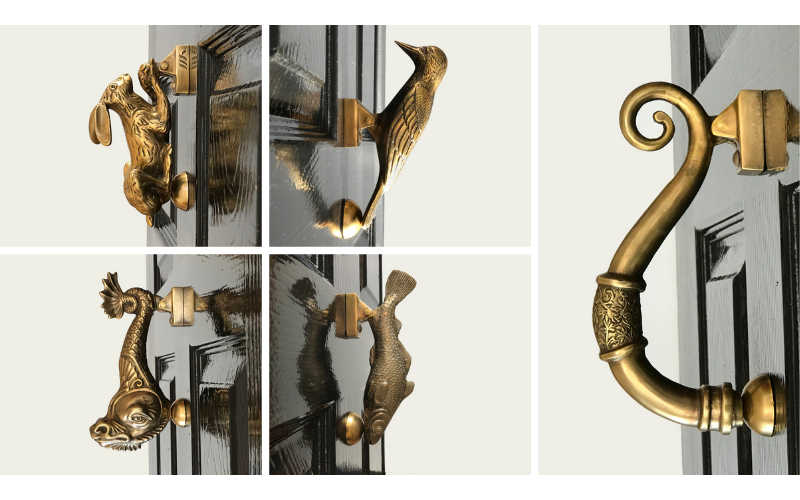 We’re crazy about the front door knocker. You may think we’re eccentric but at Adams & Mack, we see each of our knockers as having a personality of its own. The touch, the feel and, of course, the sound of the knock gives each of our door knockers its own unique character.

We’re often asked about the history behind the front door knocker and what inspired us on our journey to produce our own collection. So here’s the story so far…

The first record of a front door knocker dates back to Ancient Greece. The Greeks considered it impolite to enter a dwelling without giving a warning. Wealthier Greeks had slaves to open the front door. The slave was attached to the door by a chain which ran through a heavy metal ring that was securely fastened to a back plate on the door. Over time, the metal ring became a handle which was used to knock the back plate. Hence the door knocker was born. 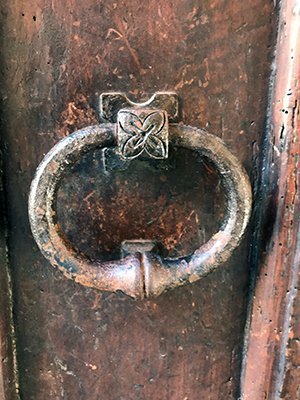 The Romans carried on the custom and before long the front door knocker was commonly used across the Roman Empire. Right up until the 15th Century, a heavy metal ring continued to be the standard design of door furniture that visitors used to announce their presence. Around this time, blacksmiths began to produce different forms of metal ring. Then, craftsmen began to experiment with other artistic designs, replacing the metal ring with different shapes to act as the hammer element of the door knocker. There are records of people adding character to their homes with elaborate door knockers as early as 1600.

With greater opportunities in terms of design, house owners could be more creative. They began to view door knockers for their artistic value as well as for their practical use. And so the door knocker became not just a way to show your presence as a visitor but also a symbol to communicate a message about your tastes, profession and even religious beliefs.

Historically, the earliest door knockers were made from cast iron. It wasn’t until the Georgian period that brass took over as the predominant material used by foundries to produce all types of front door furniture including the door knocker. Every Adams & Mack door knocker is cast in quality brass using the ancient sand casting technique which has been passed down through generations. 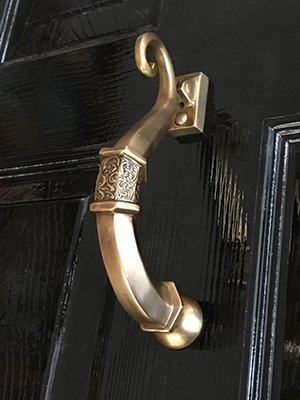 The Doctor’s door knocker is an example of a classic design from the late Georgian period. It is reputed to have been used by Doctors so that patients could easily identify their house. We have designed our own versions of the Doctor’s door knocker, ‘Vida’ and ‘Winslow‘ – to bring a touch of subtle class to your front door.

More and more, particularly during the Victorian Period, the door knocker became a statement of wealth and decadence. Being the first thing visitors saw close up on approaching the house, wealthy property owners saw it as a perfect way to make a statement. So, elaborate designs using highly polished brass became the order of the day.

New designs were inspired by superstition, religion, culture and mythology. For example, the Chinese dragon traditionally symbolises potent and auspicious powers, particularly control over water, rainfall, typhoons and floods. We have created our own version of the Chinese Dragon door knocker – ‘Alba’. 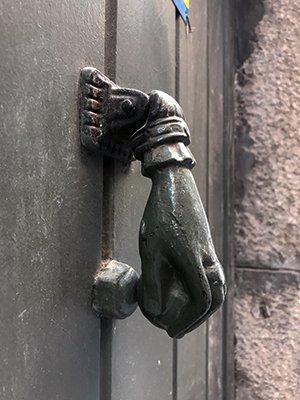 If you are a ‘door knocker spotter’, you will probably have come across a hand shaped door knocker. It is thought that, historically, they represented the Hand of Fatima, an acknowledged symbol of protection in the Muslim faith. Research suggests that Fatima Zahra was the daughter of the Prophet Mohammed and the hand door knocker is thought to protect against the evil eye.

There are now many interesting designs of the hand door knocker in use across the world. Some front doors even sport two knockers – a male and a female hand. Depending on who you are visiting, you would choose the appropriate hand to knock. Each knocker makes its own distinct sound so it would be easy for the residents to know who should answer.

At Adams & Mack we love discovering different door knockers on our travels. We continue to get inspired every time we see a new design. Every door knocker tells a story – follow us on Instagram, Pinterest and Facebook to see some of our discoveries.

Enjoy exclusive offers and be the first to hear about new products!